November 27-29th, at the Rickshaw Theatre

I have to say that this write- up is long overdue, but the delay is not in my lack of excitement for this show (mainly just seasonal chaos!)  Reflecting on it now, I shake my head a little because there really is so much to say, I’m not sure where to begin!   I certainly agree with Director/Producer, Miss Vanessa Young, however, that it really is “the craziest, outrageous, so fun dance show!”  – And I can’t stress enough that if they do decide to do an encore, it is well worth saving the date.

In the true spirit of the great Freddie Mercury, who once stated,

“A concert is not a live rendition of our album, it is a theatrical event,”

I would iterate that the Lovers Cabaret has definitely proven to put on shows that are not simply choreographic presentations, but absolute theatrical events.

The staging and costumes were excellently styled and the production itself was a tour-de-force.

As the opening sequence began, much like their previous show, “Lovers of Marley”, there was a fair amount of chaos filling the theatre, along with an air of suspense that rose, as the epic story of Freddie’s life began with a cinematic, narrative prelude and the dancers appeared on and around the stage.  In fact, all throughout the show, many of scenes would seem chaotic at first – dancers, bodies, lights, everywhere – but then, just when you didn’t know where to look, it would all come back together.

This delicate balance seems to be a trademark of the ‘Lovers’ ensemble, allowing the theatrical experience to be as unpredictable as it is compelling.

The show itself was a balance of intense moments and raucous, often raunchy, fun – which allowed for a kind of self-awareness that was as endearing as it could be comical.  The reason this works, in my humble opinion, is because of the level of diverse talent in the ensemble.

Always incorporating a unique and varied group of performers, there is a depth to the work that hits on all levels.  There is a lightness which draws you in and then just when you’re feeling settled, they shake it up a little.

Vanessa Young, Ashley Sweett, Lineke Van Kleek and their co-conspirators are clearly immensely invested in their work, but most of all, they’re not afraid to have FUN – and their choreography definitely shows that.  From the caricatured “Bicycle” number, (with Freddie on an actual bike,) to the rowdy, short-short-clad “Fat Bottomed Girls,” (who brought a new level of white-girl twerking,) and even the amusing, very literal take on the song “Delilah,” (which features some of the best dancing in the show.)

Beyond that, and all humour aside, the show had some profound undertones, as it addressed the very real truth surrounding Freddie’s life, loves and ultimately, his death from Aids.

Meaghan Hewitt MacDonald embraced all of that.  Her portrayal of Freddie was magic.  Moreover, the connection she had with the other cast members was gripping.  The complexity of Freddie’s spirit came through, as she assuredly embodied his strangeness and undeniable presence, and there was honesty in the moments that fell in between the parameters of the ‘production’. 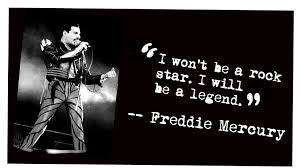 I could go on and on about each of these moments – particularly the strong portrayals of ‘Fairy Mary’, played by Portia Favro, and ‘the King’, played by Joel Hewlet, as well as the evolution of the love triangle that surrounded them, but where do I begin?

When Joel stepped into the spotlight with purpose, he stole the show.  Every movement, every gesture had a strong, easy power – he was a true beacon amid the pandemonium.  A pleasure to watch, I hope we see much more of him.

Portia also delivered stellar dancing, as we’ve come to expect from her, but the “Love of My Life” duet between Mary and Freddie took everything to a new level.  As eloquently as I can put it – shit just got real.  That, followed by the heart-breaking realization that Freddie had gone, showed a sincerity in her movement and breath that was unsurpassed.

Other highlights include (but are not limited to):

“Body Language” – YES! That is all.
“Pressure” – The inclusion of tap was AWESOME.
“We Will Rock You” & “Another One Bites the Dust” – Everything you would want them to be.
“The Prophet Song” – Haunting.

It’s amazingly fun to watch the Lovers Cabaret grow and develop!  This was another great addition to their repertoire, filled with unexpected bits and pieces, and I feel like I could write a 6-part series on all of these little bits.  They paid homage to a legend and in doing so, continue to raise the bar for local performance.

I, for one, am pleased to support them and would urge you to do the same.